New Delhi: The new MacBook Pro features a new M1 Pro chipset. The M1 Pro CPU has ten cores, is 5nm in size, and has 33.7 billion transistors. It includes eight high-performance cores as well as two efficiency cores. The GPU is equipped with 16 cores. This means that the graphics performance is two times that of the original M1 processor. According to Apple, it is based on the M1 architecture.

Apple is releasing two versions of the new chipsets, as planned. The second model is the M1 Max, which has twice the memory bandwidth. There are 57 billion transistors in this one. It is by far the largest chip ever created by Apple. This one features a 32-core GPU and 4X greater GPU performance than the M1. Apple claims that the M1 Pro and M1 Max offer significantly greater power performance than the previous M1 and PC processors.

According to Apple, the new chipsets are far ahead of the competition. Even Apple's own software will operate natively on the M1 Pro and M1 Max. Rosetta 2 is also included to ensure that Intel-based programmes work on the new M1 Pro and M1 Max hardware. Spatial Audio will now be supported by LogiXPro on notebooks as well. As per Apple, there are over 10,000 universal apps accessible. 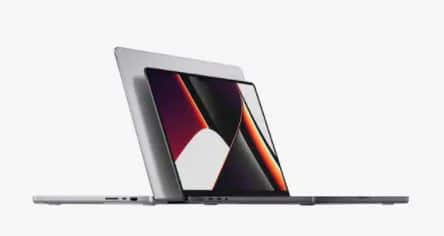 There is a notch on the new Apple MacBook Pro. It appears that the leaks were correct. The display has become brighter. It also supports ProMotion technology with refresh rates of up to 120 Hz.

The new MacBook Pro does have a Mini-LED panel that is HDR-capable.The web camera has a wider lens and is 1080p (finally). It also makes use of computational techniques to improve video quality. Microphone noise is reduced by up to 60%. The latest Macs have larger woofers to offer a deeper bass. Both the 14-inch and 16-inch MacBook Pros have a six-speaker sound system.